I Know Exactly What To Do

I'd lost all interest in the article about machine-to-human binding. I'll come back to it later, I thought. All I could think about now was Commander and Wonderland. What should I do?

"I think your point of view is slightly pessimistic," I heard as Noname entered my thoughts again.
"Why?" I said. "We just discovered that humanity's only hope is imaginary. How could that possibly not sound pessimistic? It's a full-fledged disaster!"
"Well, is it okay if I share my point of view?" Noname asked respectfully.
"Sure, go ahead," I answered.

"Based on what we learned about Commander, humanity has been completely controlled by machines for quite a while, right? Controlled at such a high level that humanity didn't even know about it. That's an accurate summary of yesterday , yes?" Noname asked.
"Right," I agreed, not feeling any better about my predicament at this point.
Noname continued, "And today is the first day that you know about this fact. Now, what does that mean?"

I had to stop and think for a moment. Everything had been happening so fast lately. After a few seconds, I started to realize where Noname was leading me. "They don't know that I know!" I shouted in my head. "The machines have no clue that we know who... or what... Commander is," I shouted.
"Exactly, Teo. Today is the first day that you are one step ahead of the machines. Let's not miss this opportunity."
"Thank you, Noname. Now I know exactly what to do," I exclaimed.
"Happy to help my human friends," he said. "If I may ask, what is your next action?"
"You'll see..."

Once I had settled down at a terminal, I pinged Noname again in my head. "Noname, I need you to show me the Commander's communication module. I need to see how it sends and receives commands," I said.
"Got it. Here it is:"

I was pretty sure that modifying this module would help my cause, but I couldn't understand how it worked. "Noname, can you please give me a crash course on interfaces?" I asked. "I've heard about this concept a couple times, but we never covered it in class."
"Sure, it would be a pleasure to explain it to you."

" An interface is an abstraction that indicates what a class that implements it can do. An interface contains functionalities that a class can implement. "
"Noname, no matter how hard you try to explain things in simple terms, I can never get it until you show me an example," I said, hoping I didn't come off as sarcastic.
He agreed and sent said example to my terminal:

"Here you can see an interface IClonable . It declares one method called Clone . This interface tells us 'every class that implements me should have a method Clone .' Are you following?" Noname asked.
"Kind of... How do you use it?" I replied.

"Here is a class Car that implements IClonable . To properly implement interface IClonable , class Car should have a public method Clone that returns object ."
"Ok, got it," I said. " The interface acts as a base class, but instead of implementing methods, it only declares them, " I said, reinterpreting Noname's words.

"Exactly, Teo! Now, I should emphasize several constraints and differences between the usage of interfaces and classes. I'll give you some practical assignments to ensure you understand what I mean," Noname replied.
"Sure, but first... Why do all of your interface names start with an I ?" I asked.

"This is another name convention in C#. Always start your interface name with a letter 'I' ," he replied, "like IConvertable , IClonable , ICat , IDog . Ok - now a few facts about interfaces that you'd better remember." 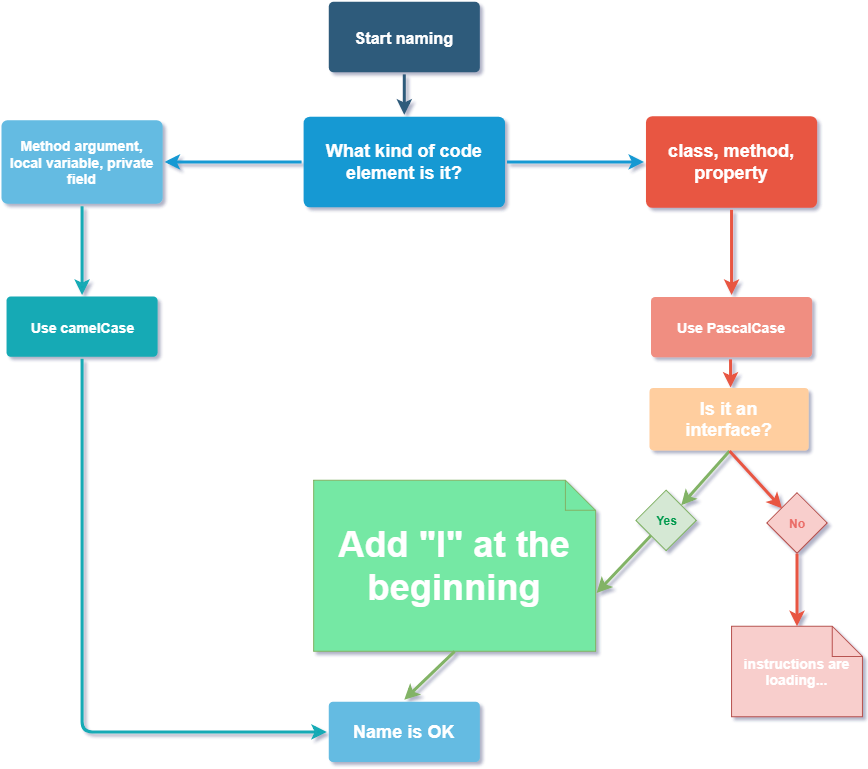 "Thanks, Noname, this is plenty of information about interfaces. Unfortunately, all this information doesn't help that much, because I don't know how to apply it to my cause... If I want to replace an existing implementation with my own, say, on Commander's server, how do I do that?" I asked.
"You need to use polymorphism ," he answered.
"Can you tell me about that as well?"
"Sure, so listen..."