Lection in the Big Kitchen

The final task of the morning session completed and lunch having been eaten, we settled in for the second part of Ritchie's lesson about new types. "We'll take it easy this afternoon," Ritchie said, "and teach you about one more type today."

He continued, " The name of this type is char . It represents one character: a letter, a digit, or any other symbol that you can imagine. To represent a char value in C#, you must enclose it in single quotes: ' s ' . Here is an example of how to create a char variable." And with that, Ritchie returned to the whiteboard.

You can read a char from the console using the method char .Parse(...) , the same as you did with double and int :

To output a char variable to the console, you can use the Console.WriteLine(...) method, the same, again, as with the other types we know. For example:

"Ritchie," someone called, "isn't a char just a piece of a string ?"

This opens up some unique capabilities. You can use an int variable as an index in the brackets [] with the string variable as well: 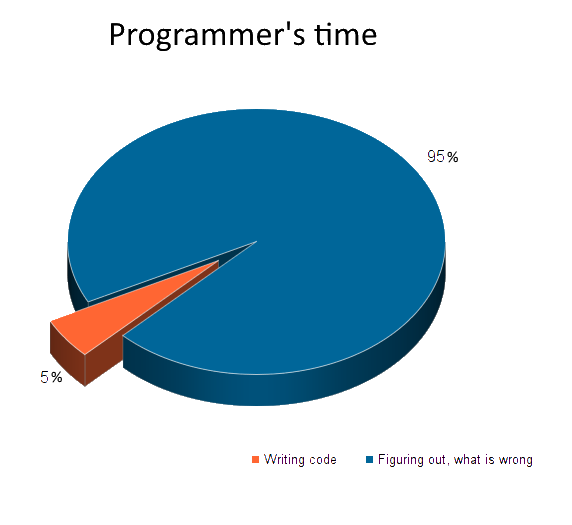 Ritchie put down the marker and erased the whiteboard. "Now, hold on to your seats for this next statement." He continued, speaking slowly and purposefully, "A char is represented as a number in the computer memory. "

You could hear a pin drop as we tried to decipher this. Someone in the back asked the question we were all thinking: "You just said that a char is a character. How can it be a number?"

It sounds complicated, I know. But a char is really represented by a number. String variables are also represented by numbers. You have to remember - a computer processor can only decipher numbers. It doesn't understand characters and strings. They were created to make our lives easier. When you write the following,

This is what happens in the memory: You probably noticed that in the code above, Console.Read() returns an int , not a char . This int represents the number that is really stored in the memory for that char. For example, 'a' is stored as 97; 'A' as 65; and 'μ' as 181. In C#, the correspondence between the real character and its numerical representation is made by the Unicode industry standard . Basically, it binds characters to numbers. You can easily find in the network the list of Unicode characters .

To convert an integer char representation, say 97, to a real character like 'a', you can use the Convert.ToChar(charCode) method:

The code above waits for the user to input a character (it even can be several characters) and press Enter. The program then reads the Unicode code of the character and converts it to a char type. Try it yourself!

After working through all of these examples, some people were beginning to pack up and leave the kitchen. A whole day of learning had gone by, and we had a whole new set of types to use in our code! Before anyone had reached the doors, Ritchie shouted one more lesson over the noise.